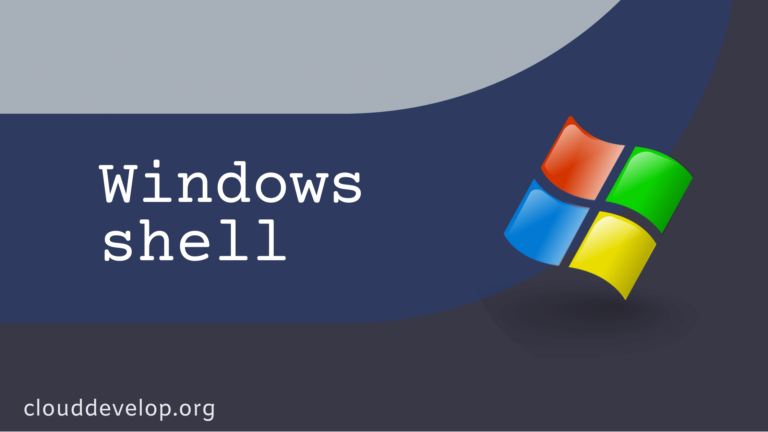 The most visible aspect of the Windows OS when it comes to computing is the Windows Shell. The shell is the structure that defines the whole user interface, including the Windows Explorer, the Desktop, the taskbar, numerous dialog boxes, and interface components, but it also refers to previous shells such as MS-DOS Executive and Program Manager.

Explorer (weirdly, the same as the MS file browser) is the default Windows shell, and it is this software that decides the design of your desktop, i.e. it provides the taskbar, system tray, start menu, and so on.

What is Windows shell used for?

Several virtual objects allow the user to do things like transfer files to distant printers or access the Recycle Bin. These elements are organized into a hierarchical namespace by the Shell, letting users and applications access and handle them effectively and consistently.

Windows Desktop is a comprehensive window that appears in front of all other windows. It stores the user’s wallpaper as well as a collection of computer icons that represent:

On the Windows desktop, users and software might very well keep computer files and directories. Such elements, of course, do not exist on a freshly installed version of Windows. Shortcuts are routinely placed on the desktop by program installers, allowing users to run installed apps. On the desktop, users may save personal files.

Special folders (sometimes known as “shell folders“) may show up on the desktop in addition to regular files and folders. Special folders, unlike standard folders, do not link to a specific place on a hard drive.

Instead, they could probably open a folder found in a location from different computers (e.g. Documents), a virtual folder whose items are a grouping of several folders on disk (e.g. Recycle Bin or Libraries), or a folder window whose content is not files but user widgets rendered as icons for convenience (e.g. Recycle Bin or Libraries) (e.g. Network). They may even start windows that have nothing to do with a folder (e.g. Control Panel).

This is a toolbar-like feature that displays at the bottom of the screen by default as a horizontal bar. It may be moved to the screen’s top, left, or right edges. Its size may be modified starting with Windows 98.

Moving the mouse pointer into the top or bottom right-hand corners of the display, or toggling from the right edge of a supported touchpad or touch screen, invokes a bar encompassing a series of 5 shortcuts referred to as the “charms.” In 8.1, this functionality was kept.

The charms were deleted in Windows 10 and the commands linked with them were transferred to the system menu within each program. Users with touch displays may now access Action Center by swiping from the right side of the screen.

Beginning with Windows 95, all windows operating Systems include a Start menu, which is typically referred to by the same name. The Start menu is used to start apps, invoke specific folders, search, and manage power states, based on the version of Windows being used.

Aero Flip was introduced in Windows 7 (which was later called “Windows Flip” in Windows 8). When the Alt key is pressed, Aero Flip displays the contents that are on the chosen window ONLY. The remaining windows are covered with transparent crystal sheets that provide the impression of an inactive window.

AutoPlay is a Windows XP feature that checks for content on newly inserted removable media and shows a window with choices relating to the content type within that media device. The options are given by installed software; it should not be confused with the related Autorun function, which is configured by a file on the media itself, even if Autorun can be selected as an AutoPlay option when the two are active.

What is shell replacement, exactly? It’s essentially a Windows-integrated software that replaces the standard shell. The shell is the GUI via which you can run programs, browse files, and so on.

You may fully modify the look of the GUI by switching the skin. Users typically seek greater power and flexibility than Windows delivers when substituting the Windows shell. Many shells also utilize fewer services than the default shell. There was once a wide variety of different shell substitute programs, but almost all of them were discontinued for various reasons.

Below is a list of some of the best replacements for the Windows shell:

Talisman Desktop is a paid shell substitute that includes a vast selection of themes for entirely customizing your desktop environment. Layered desktops, desktop panels, and other features are available.

You can change the taskbar, clock, start menu, explorer UI, and more with a little self-learning. Only compatible with Windows 7.

CarioShell is the only active and current replacement to the Windows shell that enables users to access files and applications from their desktops rapidly.

It gives your Windows desktop the appearance of a Mac OS X desktop. It cannot be altered in any way, but it does offer your desktop a distinctive appearance.

bbLean is a wonderful solution for folks who want a minimalist desktop layout. Although it hasn’t been updated since 2009, many people still like using it because of its user-friendly UI. However, like with other shell replacement tools, new themes are always being developed.

Before it was discontinued in 2015, Emerge Desktop was undoubtedly among the most successful Windows alternative shells. Windows Explorer, the taskbar, the start button, and other features are all replaced.

Among the listed replacements above, bbLean, Emerge Desktop, and Talisman Desktop has been discontinued, which means there are no newer updates for them, but one can still install and use them as they are.

What is a windows shell experience host?

This was originally featured in Windows 10. The purpose of the Windows program is to provide universal software on your computer with a windowed interface. It manages various graphical components, including the transparency of your start menu and taskbar, background slideshows, calendars, clocks, and graphics, among others.

To reduce significant CPU/RAM utilization, you may choose to deactivate the Windows Shell Experience Host in this instance. Is it possible to turn it off? Yes, it is.

From the screenshot above, you can locate it by going to your Task Manager, clicking on it, and ending the task.

The File Explorer’s Relationship with the Windows Shell

The File Explorer is a Windows component that allows you to navigate across the shell namespace. To put it another way, it can navigate drives, files, and folders like a file manager, but it can also access the Control Panel, dial-up network devices, and other features mentioned before.

Furthermore, the explorer.exe file, in addition to opening File Explorer, also launches the taskbar, the Start menu, and a portion of the desktop. However, even if all occurrences of the explorer.exe processes are stopped, the task switcher, charms, and AutoPlay continue to work, and other computer applications may still reach the shell namespace without it. It was formerly known as Windows Explorer, but with Windows 8, it was renamed File Explorer. The program’s name remains explorer.exe.