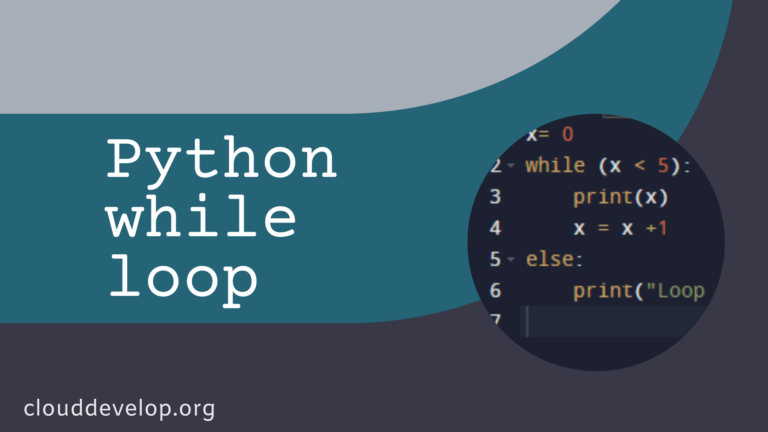 The while loop is used to execute a series of statements repeatedly until a specified condition is fulfilled. When utilizing the while loop, a condition must be supplied. The iterative procedure ends when the condition becomes false, and the next line of code is performed.

When the number of iterations is unknown, the while loop might be utilized.

How to Use while loop in Python

The while loop in Python is sometimes known as a pre-tested loop. Because there are no specified times provided, the loop will execute indefinitely if there is no condition.

A while loop’s syntax

A basic while loop

The “else” statement is an additional statement that may be added to the while loop’s syntax. This causes a certain command(s) to be executed once the provided condition in the while loop has turned false. Essentially, it is anything that is executed after the loop has been ended.

Syntax of a python while loop

The use of logical operators such as and & or allows you to expand the list of conditions in a while loop.

Making Use of Loop Control Statements

The break statement is used to break a loop before it reaches its conclusion.

This code will continually receive user input but will terminate if a negative integer is detected. An alternative method is provided below.

The continue statement will terminate the current iteration of a loop and go to the next, skipping any statements in between.

Here’s a little example to explain the impact.

The number 2 is absent from the output because the continue command was performed, leading the loop to disregard everything and proceed to the next iteration.

Python’s structure requires that code blocks (if-else, def, for) not be empty. An error will occur if a code block is left unfilled.

The pass isn’t often used because it has few applications, but it’s nevertheless useful to know. If you want to create a code block but keep it empty for some time, simply include a pass statement in it.

Here are some examples to assist you to build your notions and comprehension.

This will result in an endless loop owing to the absence of any increment. Because x will always be zero, the condition will always be true, giving in a continuous stream of 0s onscreen.

Try modifying this application to take the factorial number n! from the user. Remember to convert it to an integer before you use it.

The syntax of a do-while loop in Python is demonstrated below.

A do-while loop is terminated when the condition of the loop is found to be false or when a break statement is executed.

How To End A While Loop Execution in Python

In python, we use the “break” statement whenever we want to end it’s execution.

Break is used to end the execution of a while loop. After the break statement, any other statement that falls within the same loop wouldn’t be executed. The only situation where the break leaves the loop is in the case of nested loops. This is where control is moved to the statement that comes immediately after the end of the loop.

The python while loop and the python do-while loop are fundamental looping techniques in python programming. Understanding the principles is critical since it will lead to the development of complicated programs to tackle real-world situations.

Python is an essential component of machine learning, artificial intelligence, and data analysis, thus anybody aspiring to be an expert in these subjects must embrace it as quickly as possible.