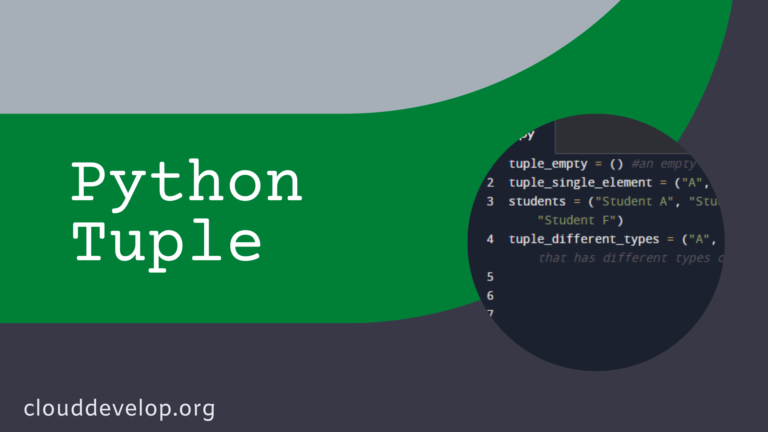 Python’s tuple is an ordered and immutable collection of items. Tuples, unlike lists, can have their values changed after they’ve been created. Tuples are defined in Python by surrounding the items in parenthesis ( ). A tuple’s components do not have to be of the same type.

Characteristics of a Tuple

A tuple’s basic syntax is as follows:

How to Create a Tuple in Python

Tuples are made by encircling objects with () and separating them with commas (,).

Accessing Items in a Tuple

You must write an index number inside the square bracket to access items in a tuple.

The index numbers begin at zero (0).

Here are some examples of ways to get elements into a tuple:

They’ll all produce the output below respectively:

How to modify a tuple in Python

Unlike a Python dictionary or a list, we know that a tuple is an immutable data type. That is, we cannot change a tuple in any way. However, there are times when we may need to change a tuple. We have no other choice except to generate a new tuple with the desired members in some scenarios. Here, we’ll change a tuple using various methods such as slicing, packing, and unpacking.

What is the best way of appending elements to a tuple?

To append an element to a tuple’s end by using tuple concatenation, much like appending a string to another string with string concatenation. To accomplish so, we’ll first create a tuple with a single element to which the tuple will be attached. Then we’ll concatenate the new and existing tuples as follows, using the + operator.

The output will be

Using the above method, we can indeed append an element to the beginning of the tuple, as shown below.

The output can be seen as follows:

The output can be seen below:

This will also give the output below:

Inserting an element in a tuple at a given location

The elements from index I to last will be in the second tuple. Then, at index i, we’ll generate a tuple containing a single element that must be entered into the tuple. Then, as seen below, we’ll concatenate the three tuples to insert the new element at index “i.”

To merge the newly created tuples, we can utilize packing and unpacking as shown below:

Both of these will produce the following output:

Modifying a tuple by deleting an element

To remove one element from the beginning of a tuple, we’ll create a new tuple with the remaining members, as seen below.

This will produce the output:

If we need to remove a tuple’s last element, we can do it by slicing out the remaining elements as shown below.

The output is seen below:

Some of Python’s built-in functions for Tuples

Tuples have a number of built-in functions that reduce the number of lines of code needed. Let’s take a look at some of the features that tuples provide.