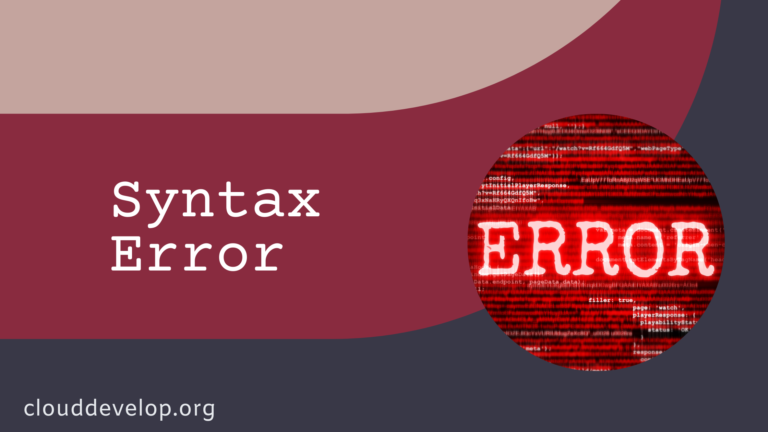 Syntax errors are among the most prevalent errors encountered by beginner programmers. When a programmer produces an inaccurate line of code, this is called a syntax error. Most syntax errors are caused by omitted punctuation or a misspelled word. The code will fail to execute if a syntax error occurs in a compiled or interpreted programming language.

Since programming languages differ in their rules and punctuation, certain syntax errors may occur more frequently than others. Regardless of whether you’re programming in Java or Python, syntax errors must be corrected for the program to operate properly. The following are some of the most common syntax errors made by novice coders, along with some recommendations on fixing them. But first, what is the syntax error?

What Is a Syntax Error?

A syntax error occurs when a program’s source code has an error. Because computer programs must adhere to rigorous syntax to compile effectively, any portions of the code that violate the programming language’s syntax will result in a syntax error.

This type of error is different from a logic error in that it’s a little grammatical mistake confined to one character. For example, a missing semi-colon at the end of a line or an extra bracket at the end of a function can result in a syntax error.

Programming languages’ rules and punctuation vary; therefore, some syntax errors may be more common than others. In both Java and Python, syntax problems must be fixed to run properly. Here are some of the most common syntax problems that new coders make and some advice on how to remedy them.

Many computer languages rely heavily on parentheses as a punctuational device. You can use this tool to structure your code and perform many activities. Inexperienced coders can easily forget how many parentheses they have used or if they have matched them up correctly when developing code.

The code will not be compiled in one of the missing parentheses. Code that doesn’t have its parenthesis in the correct order may also perform incorrectly.

Always check to see that the parenthesis is aligned appropriately when there is a syntax error. Make the necessary corrections and then run the code to see if it compiles successfully.

It is also useful to keep the code as orderly as possible. Keeping track of parentheses is significantly easier if they are arranged in a logical order or are visible.

Syntax Error: Variables that have not been declared or spelled correctly

Data, text, and numbers can all be stored in variables. Coders can more effectively use programming languages because of the flexibility provided by variables. Declaring a variable early in the program is essential if it is to be used. Inexperienced programmers may make a grammatical or spelling error when declaring a variable.

Make sure that the variable is declared in the code before proceeding. If the variable isn’t already declared, add a line of code declaring it before it’s used in any code.

If you’re certain you did define it, go back and double-check the code for any typos or alterations. The code won’t work if there is a typo or a change in spelling.

Strings of quotation marks are used to convey a statement. It’s possible to display a statement inside parentheses using either double quotes (“) or single quotes (“”), but they cannot be used in combination. An error can occur if a coder doesn’t include the end of a quote or utilize incorrect quotes.

There may be an error in the text. In the same way that you would verify the parentheses, you should check the quotes. Verify that the code can be executed by comparing the quotation marks to ensure they are the same.

Ensure that there are no misspellings or missing punctuation errors in the return statement.

Semi-colons indicate a pause in a line of code in many programming languages. Typically, semi-colons are used in C and Java. Coders who use these languages are more likely to encounter this syntax error. Code runs until the next semi-colon is encountered if a semi-colon is omitted from a line of code. Any further punctuation or statements are usually flagged as errors.

To see if there is a missing semi-colon, look at the end of the statement. Practice creating code using a semi-colon instead of inserting a period at the end of a sentence.

Some Other Important Tips To Fix Syntax Errors

The IDE’s debugging system quickly discovers instructions that have been misused. For example, if you have a string like “22” and add another number, the program will throw a syntax error.

Even if the strings contain numbers, the application sees them as text. Despite the IDE telling them where the number and string are combined, programmers have to go back in time to figure out how a string came to be a string.

Programming languages have syntax errors based on variables (assigned values) and functions (called code groups). For example, a function could be named after a language-reserved command name instead of being set as an integer.

Variable and function names, such as permissible character types, case sensitivities, and starting character constraints, are also specific to each language’s naming conventions. The PHP language, for example, does not allow variable names that begin with a number to exist.

Correcting syntax errors is critical in computer programming since the program will not run unless fixed. A program can’t interpret commands if it has syntax errors. The syntax is all about appropriate command order and spelling for programming.