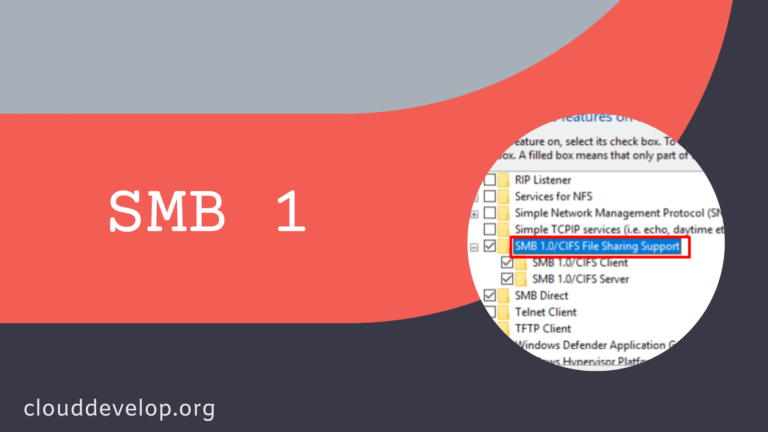 SMB, or Server Message Block, is a fundamental service that has been in use for many years. Windows may use this internet standard protocol to exchange files, printers, and serial ports. SMB is used on top of the TCP/IP protocol across the internet.

SMB1 has been around since Windows 95, and it is still often encountered and misused on networks. If your network has SMB1 enabled, it can be utilized in blended assaults that may include malware and other ransomware.

If the below error occurs during the imaging and flow cytometry server connection and exporting of data in Windows 10, please follow these steps in order to enable SMB1.

1. Open Run by pressing the Windows + R keys, then type optionalfeatures.exe into the Run box.

2. In the list, look for SMB 1.0/CIFS File Sharing Support and tick the box next to it.

3. If asked, click the “Restart button.” After that, SMB1 will be operational in Windows 10.

Variants of the SMB Protocol

Many protocol versions have been created since the introduction of SMB to meet the increasing sophistication of the contexts in which it has been used.

The precise protocol variation used by the client and server is negotiated using the negprot SMB, which must be the first SMB transmitted on a connection.

The Core Protocol, also known as PC NETWORK PROGRAM 1.0 in SMB implementations, was the initial protocol variation. It was capable of performing a limited set of operations, which included:

As additional capability was required, other variations were added.

You may disable SMB v1 on your network using a variety of methods. You may, for example, use a group policy to deactivate it with a registry entry. Furthermore, you may use the instructions in KB2696547 to determine whether SMB1 is still in use on your network and to properly disable it.

PowerShell may be used in Windows 10 to check if SMB1 is enabled on your PC. To accomplish this, follow the instructions below:

First, determine whether SMB1 is activated. You are to open a PowerShell with administrator credentials with this goal in mind. To do so, hit the Win+x key combination and then choose the program from the list.

Then execute the following command:

To deactivate SMB1, please use the following commands:

Simply run the following command to enable it. Furthermore, press Y to restart the computer and accept the modifications.

You may discover that older copiers and printers, as well as older network-accessible storage, still highly depend on SMB1 for proper functionality. You must decide whether the risk of SMB1 is acceptable, or you may contact the makers of your impacted equipment to see whether a firmware upgrade to support SMB2 or SMB3 on these older devices is available. A list of items that require SMB1 is also available.

Following that, as indicated by US Cert, you will be able to block SMB1 from the firewall settings. Even though a majority of the firewalls these days do this by default, you should still check to see whether yours does it at the network boundary. It would accomplish this by blocking TCP port 445 and the protocols connected with it on UDP ports 137-138 and TCP port 139.

Examine your SMB1 status and beef up your Server Message Block today.

The SMB protocol allows computer software to read and write documents as well as request resources from server programs over a network. The SMB protocol can be used in conjunction with the TCP/IP protocol or with other network protocols. IBM developed SMB 1.0 for file sharing in DOS. It pioneered opportunistic locking (OpLock) as a client-side caching approach aimed at reducing network traffic. Microsoft’s LAN Manager software will subsequently integrate the SMB protocol.

Is SMB1 a secure protocol?

Notably, in 2017, both the WannaCry and NotPetya major ransomware outbreaks employed SMB1 as an attack route. Because SMB1 is so vulnerable, most security experts now advise administrators to stop it totally via a group policy update.

On a server, protection is applied at the share level. Each share may be assigned a password, and a client only needs those credentials to access all documents in that share. This was SMB’s original security model, and it is still the only one accessible in the Core and CorePlus protocols. Share level security is enabled by default in Windows for Workgroups and Windows 95.

Individual files in each share are protected based on user access privileges. Every user (client) must log in and be authorized by the server. When the client is authenticated, it is assigned a UID, which it must use on all subsequent server requests. Since LAN Manager 1.0, this model has been accessible.

There are a couple of SMB clients available today, as well as a pretty big number of servers from a variety of suppliers.

Microsoft’s core clients are featured in Windows for WorkGroups 3.x, Windows 95, and Windows NT. They are most visible if you’re using the File Manager or Windows 95 Explorer, which allows you to connect to servers on the network. They are, however, also utilized when opening files with a UNC path (universal naming convention).

Among the other clients are:

What’s the distinction between SMB and Samba?

SAMBA was once known as SMB Server; however, the name was later changed due to SMB Server becoming a product in its own right. SMB was CIFS’s predecessor. Protocols include SMB (Server Message Block) and CIFS (Common Internet File System). Samba supports the CIFS network protocol.