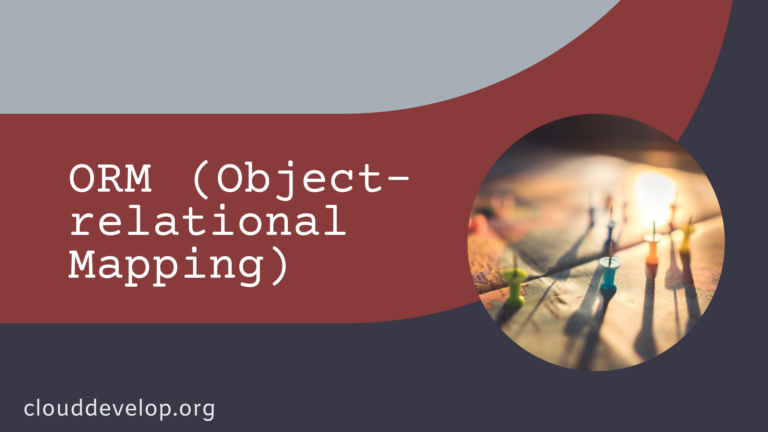 ORM is an acronym for Object-relational Mapping. Simply put, ORMs are used to translate data types between a programming language and a database. This allows developers to use multiple databases with different programming languages and vice versa, reducing data parsing/conversion time and errors.

They’re typically utilized in conjunction with relational databases and object-oriented programming. What an ORM accomplishes in the context of an MSSQL database and a C# programming language is, it links database system type to POCOs (plain old CLR object or plain old class object).

These two types of systems may not have the same set of logical principles for constructing data, necessitating a conversion, which is where the ORM comes in.

This method organizes data within the code’s object structure. Within your computer code, you manage data using classes and structures. Because the database structure is intimately linked to the code, it is hard to get rid of the database and export it to a different application using this method.

This strategy tries to separate the database from the business logic in the objects. This separation makes it simpler to switch databases while maintaining the same programming logic.

ORM (Object-relational Mapping) is a database manipulation paradigm that allows you to alter data from a database. In other words, instead of making use of SQL, you can use your own language to call and change data from the database.

Hydration is the process of converting data into objects, which usually entails converting column values into object properties. It’s for this reason that ORM libraries are specific to each language. That is merely the fundamental principle; ORM frameworks are far more powerful, particularly as your application and database become more sophisticated.

The fundamental advantage of an ORM is reusability, which allows data object methods to be called from different portions of the program, even distinct apps. The ORM layer also contains the data logic, such as the determination of a forum user rating based on the number of contributions and the popularity of those contributions.

When a page needs to display a user rating, it simply calls a data model method without caring about the computation specifics. If the computation changes later, you’ll only need to change the model’s rating technique, leaving the rest of the program alone.

Another benefit of utilizing objects rather than records and classes rather than tables is that you can add new attributes to your objects which don’t need to match a table column. For example, if you have a client table with two fields named first name and last name, you might want to be able to only require a Name.

In the world of OOP, it’s as basic as introducing a new method to the class of the Client (the accessor method). From the application’s perspective, the LastName, FirstName, and Name variables of the Client class are identical. Only the class may determine which properties are associated with which database columns.

There are a variety of ORM tools on the market. The following are some of the most often used tools for developing applications.

An ORM framework is a collection of generic interfaces and implementations that make working with databases simple.

It’s built on an object-mapping framework, which maintains data consistency when working with it. It also works well with other programming components, ensuring a smooth data flow across the application (example: from REST to database, from the database to REST).

The following are some examples of ORM frameworks:

Everything becomes apparent when you use examples. Assume you wish to build an e-commerce site. You must also remember that a consumer may have different shipping addresses for receiving orders, among other things. As a result, you must account for this in your data structure.

You begin by creating a new class, Account, to hold all of your customers’ information, such as email addresses and passwords. You then construct a new class, shipping address, to store information about a single address. ORM creates two tables in the database to map these objects whenever you utilize them (for example, account and shipping address).

It’s not enough to have the two objects. You need to specify that the Account can have several ShippingAddress objects, so you just define an array of ShippingAddress as a field on it. That’s it; that’s just how it is. The code will handle the relationship as well.

You can implement this in a variety of ways depending on the programming language you’re using, but the essential notion remains the same.

Database migrations, contrary to popular belief, do not always imply a switch from one database to another. Instead, they are Object-Relational Mapping’s bread and butter.

Simply described, migration is a database command that is executed to change the database structure. A migration can build a new table, delete an existing one, or change the fields and relationships in an existing table.

Queries aren’t used to create migrations. Instead, you write them using ORM syntax, and ORM will generate the appropriate queries for you, based on the database you’re using.

This differs among different ORM libraries, but the idea remains the same. Each migration will be defined by a single file; however, each migration may contain several instructions.

A migration can, for example, add a table in the up section and remove it in the down part. This way, if necessary, you can revert to the previous database configuration.

Some ORMs even go a step further. They create migrations for you automatically based on the definitions of your classes.

Whether or not to use ORM in an application is determined by the project needs. Because of the learning curve and sophistication added to the project, ORM may be unnecessary for small applications. It may also run poorly in a project with sophisticated queries or that requires great efficiency if it is not optimized.

When using ORM, you may concentrate on just the business logic rather than the database. However, developers should do their study before committing to using an ORM to boost the OOP development process.