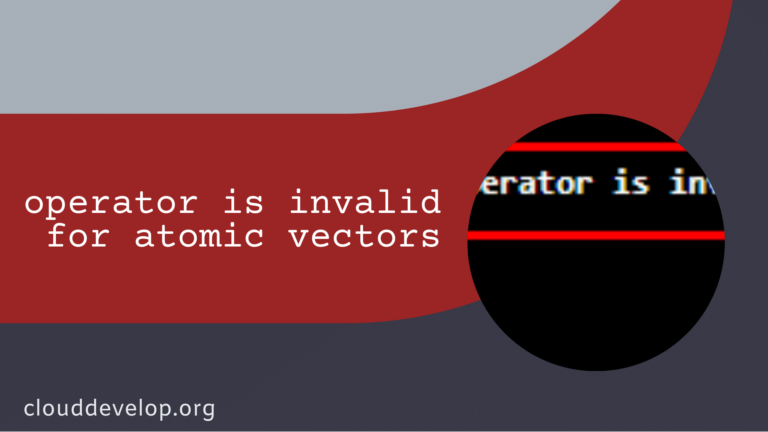 The error “The $ operator is invalid for atomic vectors” comes because of the program’s inability to index-access a vector. The dollar symbol ($) denotes that an item has been allocated to a variable name instead of an arithmetic operator. This may also point to functions or scripts that have names that are similar to the names of their parameters.

What exactly are operators in R?

Operators are just the symbols that tell the compiler how to perform various types of operations on the operands. Operators replicate quite a number of logical, decision and mathematical operations that may be done on a set of numerical, integers, as well as complex numbers, all taken in as input operands.

You might just have experimented with using the $ operator to access the elements of a vector. In other languages, it is referred to as string arrays. It is called an atomic vector in R. They occupy memory space in a continuous manner, allowing the different aspects of the atomic vector to be accessed sequentially.

For example, if we have the positions; position1, position2, they will be represented as atomic vectors with the notations vect[1], vect[2].

This can also be expressed in the form of a variable for inclusion in an iterative loop.

However, while accessing the different parts of an atomic vector, you must exercise extreme caution because if the various parts of the vector are read in an erroneous form or the sequence is wrong, you will encounter the $ operator is invalid for atomic vectors error.

At what point does the $ operator in R becomes invalid?

One typical error encountered in R programming language is the $ operator is invalid for atomic vectors error.  This error happens when you use the $ operator to read the element of an atomic vector. Any one-dimensional data item formed in R using the c () or vector () functions is referred to as an “atomic vector.”

When you try to apply $ on a non-recursive object in R, you receive the message “$ operator is invalid for atomic vectors.”

The following is an example of code that demonstrates the error:

The outcome of this code snippet is shown below.

It is really simple to correct this error. Simply try changing the $ operator to a bracket in reference form. You may also use the getElement() method to do this.

A different form of this error might arise when we import a file and read it with our code. In such circumstances, after inspecting the input csv file, you will most likely discover that it was due to a duplicate value in the sample name in the first line, as illustrated in the image below:

Upon renaming it as shown in the image below, rerun the code to resolve the issue.

You may also use the as.list(x) command to convert a vector to a list. You will be able to utilize x$a notation for your atomic vector this way. Look at this code: