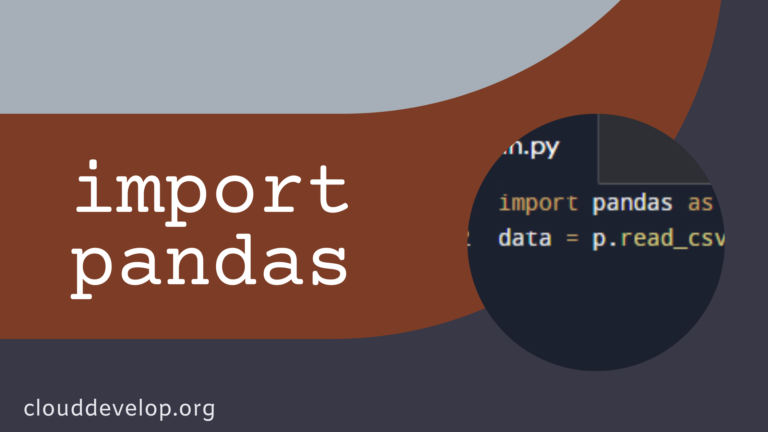 Python is so popular in the data science world and this is so because of its ecosystem and the libraries that make python integration seem so natural. Pandas is one of these libraries.

What exactly is Pandas?

The import syntax for pandas is as follows:

While Pandas is a fantastic tool for analyzing data, it does have several flaws, particularly when coping with big volumes of data. Pandas is a terrific way to analyze data in Python, but it requires that the data fit in memory for all of the analytics and calculations to be performed.

When working with large amounts of data, this can be difficult because the size of your data can soon exceed the amount of memory available on your machine, making searches slow and unscalable. The use of “Apache Spark” is required to solve this problem, although the focus of this article is on pandas implementation.

What Pandas Are Used For

Here are a few examples of what pandas can be used for:

Pandas is an external library that must be installed before it can be used in your project. The library’s name is pandas, and you can install it with your preferred Python package manager. Depending on your preference, pipenv or conda can be used, but the technique is the same.

You can go ahead and input the following command directly

It is highly recommended that you use a Jupyter notebook in the process. Do so by using the following command

Now you have pandas installed and ready to be imported for your projects.

You can install pandas on Windows by putting the following into the command prompt:

If the prompt doesn’t recognize ‘pip,’ you may also use “pip3 install pandas”. Before typing the preceding commands, make sure you have Python installed on your system.

Importing pandas from a CSV file

Assuming we have a file named “NationalParks.csv” and we want to read its data using Pandas, then we can do so by typing the following commands

Calling one function read_csv with the file name is all it takes to import a CSV file. The function head is called on the second line of code, and it prints the first five rows of data.

Importing pandas from a JSON file

Reading JSON files is no more difficult than reading a CSV file; it’s just a matter of calling a function. Let’s pretend we have a file called “NationalParks.json” that we wish to read the data from with Pandas. This will be coded as follows:

So far, we’ve read data using default values, which has worked well in most circumstances. There may be times, though, when you need to adjust the way you read and process the data.

Panda’s reading functions are comprehensive and customizable. The index col parameter, which allows you to specify the column or columns used as the DataFrame’s index, is a crucial and often used parameter.

Setting a Different Alias Than pd

Before beginning the visualization process, data scientists must first investigate, clean, and convert their data. Pandas make these activities simple with just a few keystrokes, and they may be used to visualize data instead of utilizing other libraries like matplotlib and seaborn.