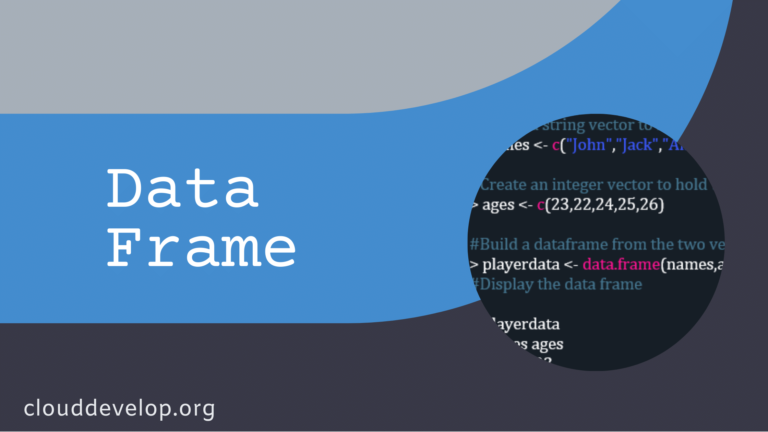 A Data Frame is a collection of equal-length vectors. It features a two-dimensional array-like structure, with the number of items in each column being identical and row names being unique.

Data frames, unlike matrices and vectors, have no restrictions on the data type of variables. Every data frame can include a variety of numeric, textual, and factor values. The sole requirement for creating a data frame in R is that all records should be of equal length. Data frames in R provide a number of functions and characteristics that allow them to manage massive volumes of data for statistical processing.

In R modeling packages, the data frame is the most often used data structure. A data frame has the following characteristics:

In R, how do we define the data frame?

The data.frame() function in R may be used to generate a data frame. As parameters, this function accepts any number of equal-length vectors, as well as one optional argument stringsAsFactors. Below is an example of how to make a basic data frame.

Observe how the data frame’s structure fits both the string and the related number. A data frame can contain an unlimited column number like this. Every entry in the data frame is additionally given a special index number by R, as illustrated.

The value of the input stringsAsFactors is FALSE. The R compiler would otherwise regard each name as a distinct category variable.

Using the R Language to Get Records from Data Frames

The index numbers or column names can be used to retrieve the attributes of data frames. The indexing of columns is performed with the [[]] sign, which is a double square brace symbol. When utilizing the names to access the columns, you must include a dollar sign $ before the name.

A matrix indexing similar notation can be used to retrieve data at a given position, such as the second item in the fourth column. Consider the following scenario.

Real-time data is frequently dynamic. As additional variables are added, the data structure changes. As more studies are conducted, the duration of the data changes. R allows you to add and delete rows and columns from data frames to satisfy these needs.

Let’s try introducing a new entry to the emp data frame we just made. To do so, we must first generate the records that will be inserted to the data frame individually. Let’s say we only need to add one record.

Now, as seen below, we add this entry to the emp dataframe that has already been generated.

Instead, a cbind() method can be used to add columns to the data frame.

Performing database joins on tables is akin to merging data frames. When a different data frame contains more information about one of the data frame’s columns, we may simply integrate the two by using the common column. Consider the fact that we have information on the marital status of a few of the employees, as shown below.

To acquire the combined information, we will now merge it with our emp data frame.

Even if we don’t know anything about any of the workers, the data frame is filled with NA values to guarantee a seamless integration.

A list having the type “data.frame” is referred to as a data frame. Lists that can be converted into data frames are subject to certain limitations.

For many applications, a data frame may be thought of as a matrix containing columns of various modes and properties. It may be seen as a matrix, with the rows and columns retrieved using matrix indexing standards.