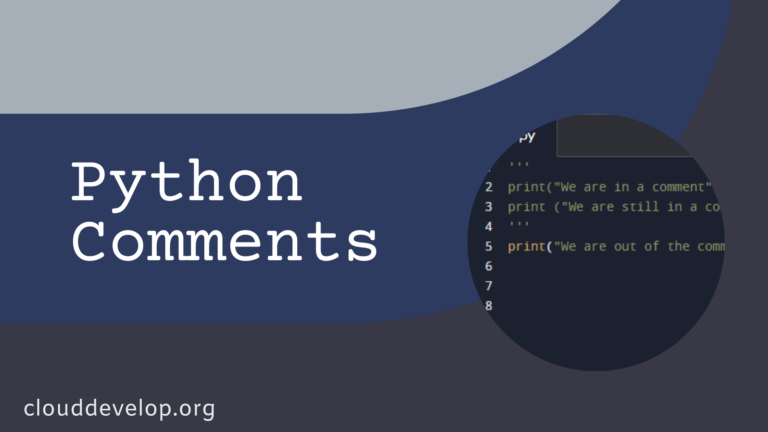 Comments act as signposts, making a piece of code self-evident and easy to read. Python commenting is a little different from other languages, but it’s not too difficult to get used to.

There are two types of comments in Python: single line and multiple line. Single-line comments are useful for brief, quick comments (or debugging), whereas block comments are frequently used to describe something in greater detail or to block out an entire portion of code.

The hash (#) symbol is used in Python to denote the beginning of a comment line.

In Python, single-line comments are signified by the hash symbol “#” and do not contain any white spaces. As the name implies, this type of comment can only be one line long. They’re useful for short explanations and declarations of functions.

As you can see in the sample above, we placed comments at the beginning and end of the lines to meet our needs.

Python allows you to have comments that span many lines. Multiline or block comments are examples of this type of comment. This commenting style can be used to explain anything more elaborate.

This expanded type of comment can be applied to any or all of the following code. Here’s an example of how to utilize the Python multiline comment.

You should start each line with the pound (#) sign, followed by a single space, to add multiline comments. A comment can be divided into paragraphs. Between each para, add an empty line with a hash mark.

The octothorpe is another name for the symbol (#). The word was coined by a group of Bell Labs engineers while working on the first touch-tone keypad project.

You can also use three single quotes before and after the part you want to comment on.

Docstring is a Python built-in feature that is usually connected with documentation. They are placed just beneath the functions, classes, or modules and indicate their purpose. The doc property in Python makes Docstring available.

The following is how to use Docstring in your code:

Python comments have a lot of benefits. Consider the following scenario: your senior developer has requested that you make some last-minute tweaks to a function in your code. You feel a little anxious since you can’t recall whether or not you added remarks.

However, once you open your codebase, you’ll be relieved to discover that Python comments have come to your rescue!

The advantages of comments in Python are numerous, thus they should be used wherever possible. Take a look at a few of them:

Python comments make the code much easier to understand. They simplify the code and eliminate the need to remember why specific code blocks were written. As a result, Python comments not only make it easier to read your own code from six months ago, but they also help other developers understand your work.

Another area where comments are extensively utilized is in the process of blocking out code for testing or execution. You can always comment out the remaining lines of code the next time you want to test out certain specific lines of code.

Do you want to learn how to make good python comments? Then take the following steps:

A program’s value is enhanced with comments and docstrings. They improve the readability and maintainability of your programs. Even if you need to refactor the same code later, having comments available will make it easier.