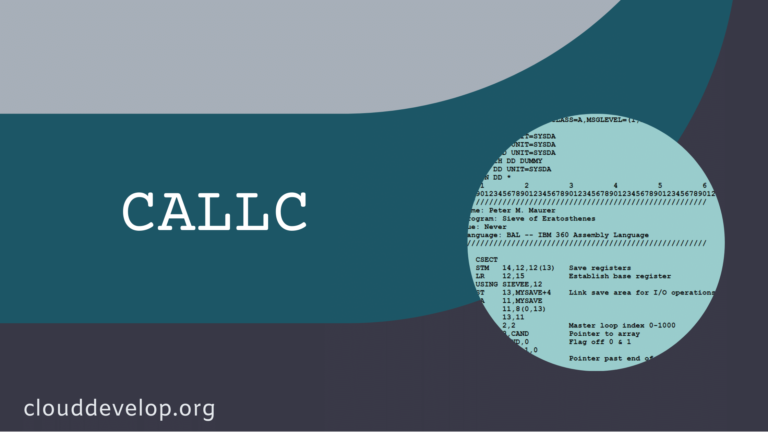 CALLC is a z/TPF high-level programming service (also characterized as a general macro) that can be used to invoke a C function from a BAL (Basic Assembly Language) program.

To get a clear understanding, we start by defining a basic assembler language, what it’s used for and why we need a macro to call its function.

BAL is the assembly language used by the IBM 360/370/390 computer family. Without certain operating-system-specific code, it is impossible to program in assembly language. At the very least, one must adhere to the right communication norms. For I/O activities, it is also essential to interact with the OS, which is commonly done directly.

BAL, like the majority of IBM 360 languages, is card-oriented. Labels must begin in column 1 and work their way down. Unless they are extended to the following line, statements may not go above column 71. By putting an X in column 72, one can resume writing statements.

Now that we know what BAL means, it is now time to know what a macro is, since CALLC constitutes the two.

What is a macro?

A macro is a sequence of keyboard strokes or button presses that are recorded and then instantaneously played back when needed.

For instance, during an appointment for a simple bladder infection, one simple keystroke can indeed add a Read code submission, a few other free text, and simply prescribe medications – assuming, of course, you’ve initially prepared the macro editor to carry out some of these precise activities when ALT-F7 is pressed.

Windows Operating system has a basic macro recorder, but to get the most out of the macro method to data entering, you’ll need a far more advanced macro application. Macro Express 2000, for example, is a polished, stable, and versatile macro editor which also offers great value for money.

What the CALLC will help you achieve?

By using macros to speed up and automate bulk actions when running processes, the CALLC can help to achieve the following:

Explaining the chart above

Favorable Conditions for Setting Up CALLC

The example below demonstrates an assembly program that calls a three-parameter C function. To invoke the C function, use the CALLC and CPROC macros.

In the example above, “myfname” is the C function